Posted at 11:44h in Czech Republic, Europe, Karlovy Vary, Travel by Sabina 0 Comments
“Excuse me, which way is the promenade?” I ask an elderly shopkeeper in fluent Czech, but she just vacantly stares back. “Девушка, я вас не понимаю. Говорите, пожалуйста, по-русски,” she finally replies. Miss, I don’t understand you. Speak Russian, please. “Which way is the promenade?” I try again in Russian and she finally smiles, pointing me in the right direction.
This anecdote not only smugly demonstrates my knowledge of foreign languages, but also the fact that the city of Karlovy Vary (also known as Carlsbad) is slowly but surely being transformed into a Russian enclave within the Czech Republic. Not only are shop signs translated into Russian – some places no longer even have Czech signs. 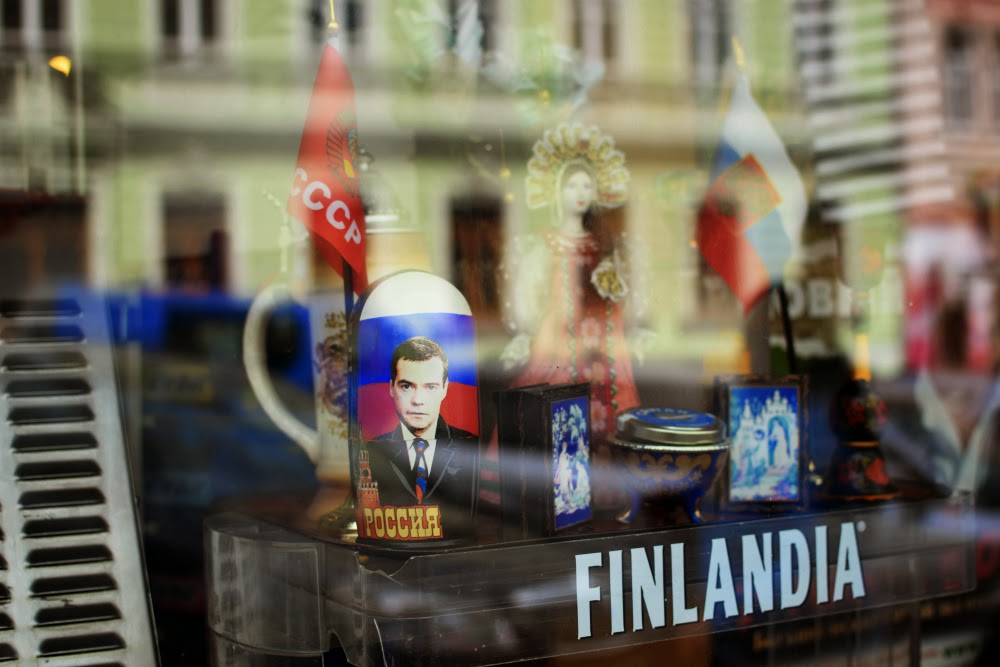 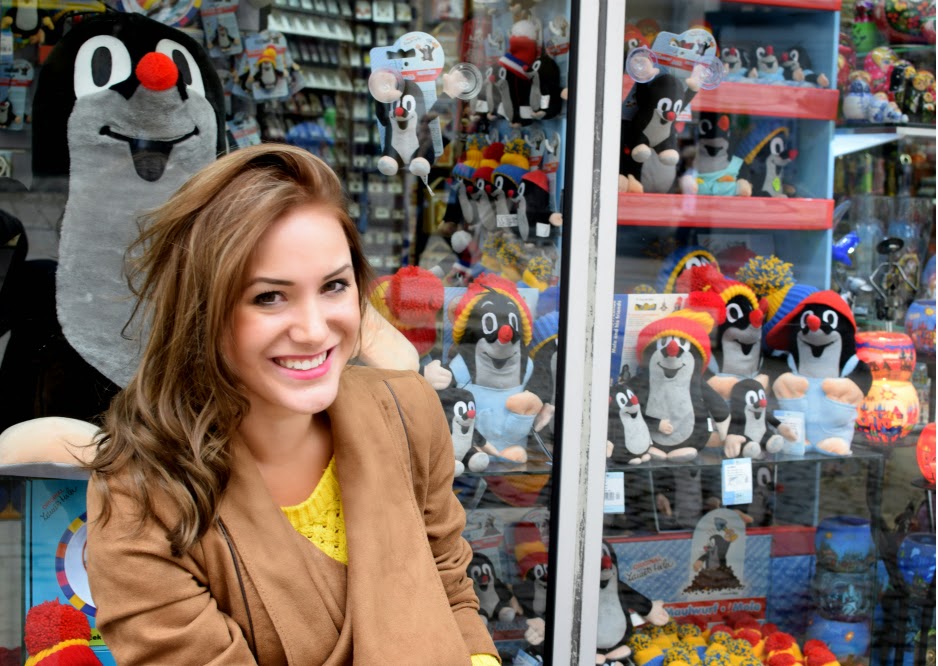 Souvenir shops selling traditional Czech memorabilia are interspersed with Russian grocery stores. Double-tailed lions and brown bears, Dvořák and Tchaikovsky, beer and vodka. In the photo above, I’m posing next to a relic of my childhood – an animated character called Krtek or the Mole, beloved by children worldwide. When I first found out that Krtek was popular in places like India, China and, yes, Russia, I was shocked. How could something so Czech travel so far? Fast forward about a decade and I – the words “made in Czech Republic” embossed in my passport – am following in Krtek’s footsteps, minus the stylish dungarees. I suppose some Czech exports really can take the world by storm! 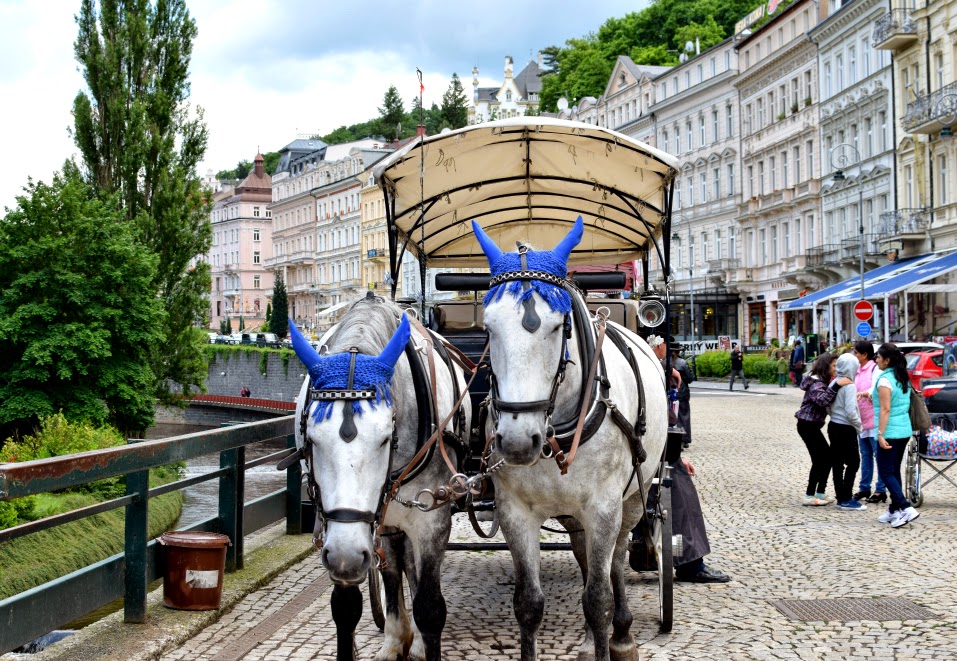 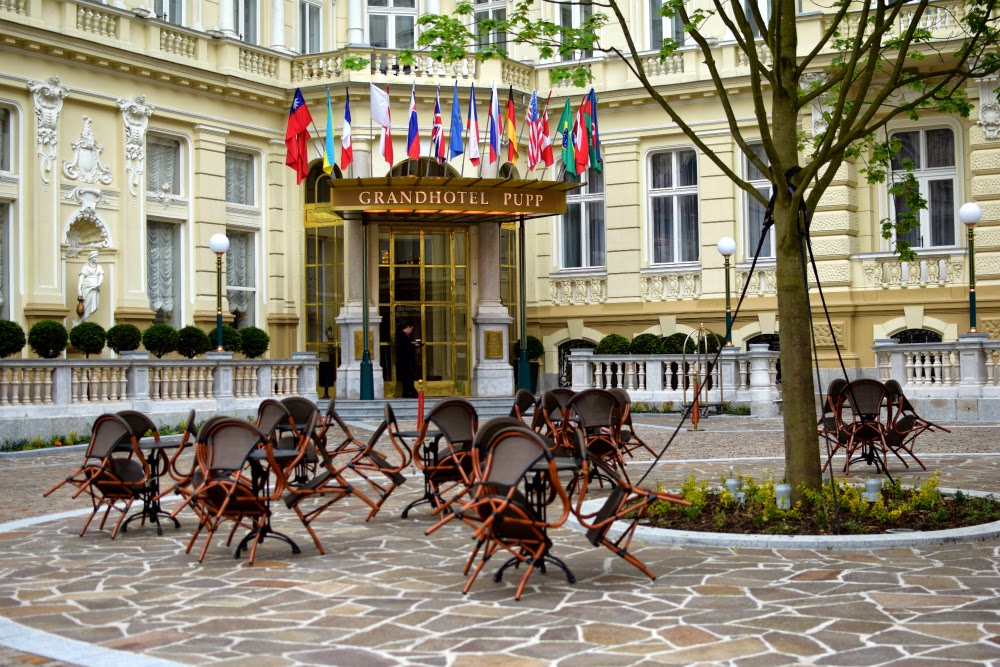 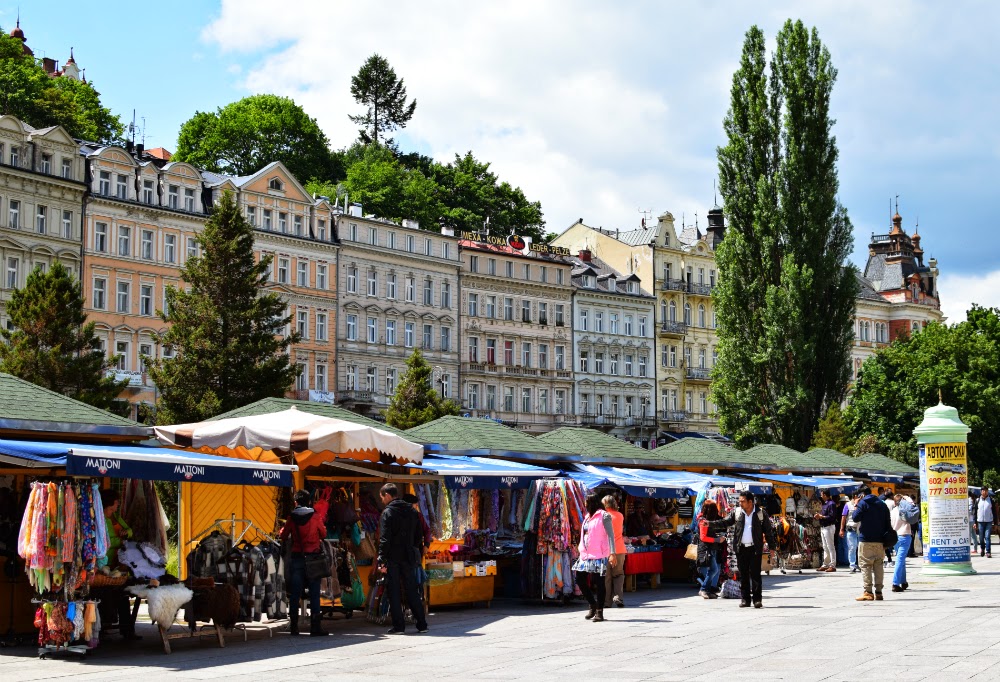 Karlovy Vary is the Czech Republic’s most visited spa town, mainly known for its healing hot springs and stunning architecture. Does it feel vaguely familiar? It certainly might – if you’re a Bond fan, you surely remember it from “Casino Royale” (2006). Grandhotel Pupp was used  as Hotel Splendide in the film, but it has yet another claim to fame – it is one of the central sites of the Karlovy Vary International Film Festival, one of the most prestigious film festivals in the world. 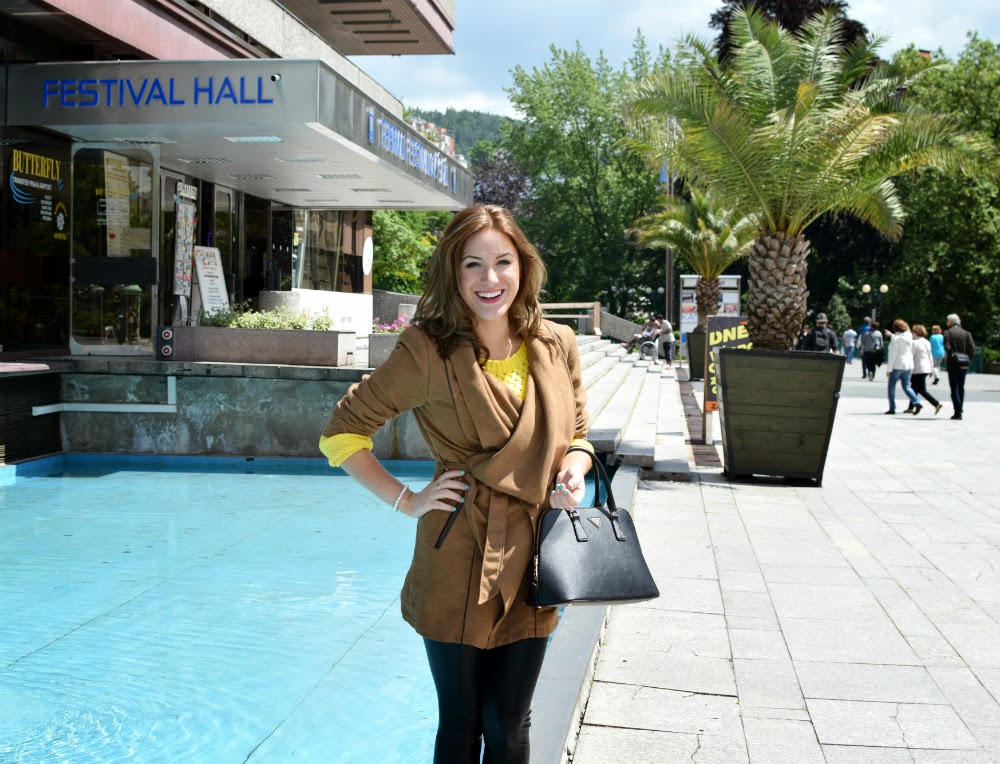 Fresh from the press: “The festival hall has seen A-list celebrities like Robert De Niro or Sharon Stone, but now even the beloved, internationally renowned author of ‘Girl vs Globe’ has made time in her busy schedule of reality TV binging and chicken wing eating and graced the town of Karlovy Vary with her presence.” True story. 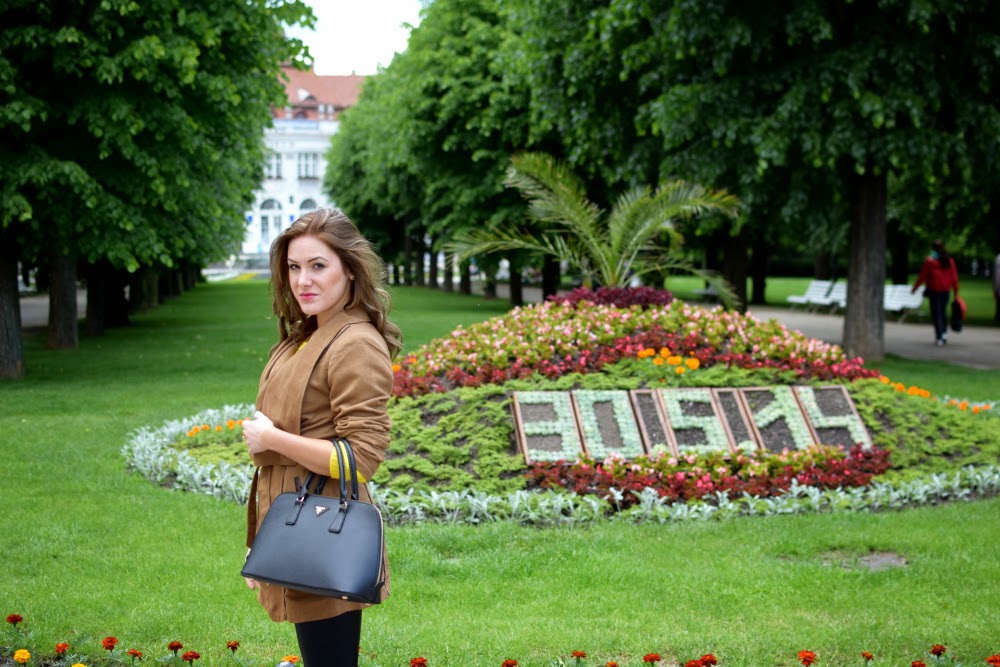 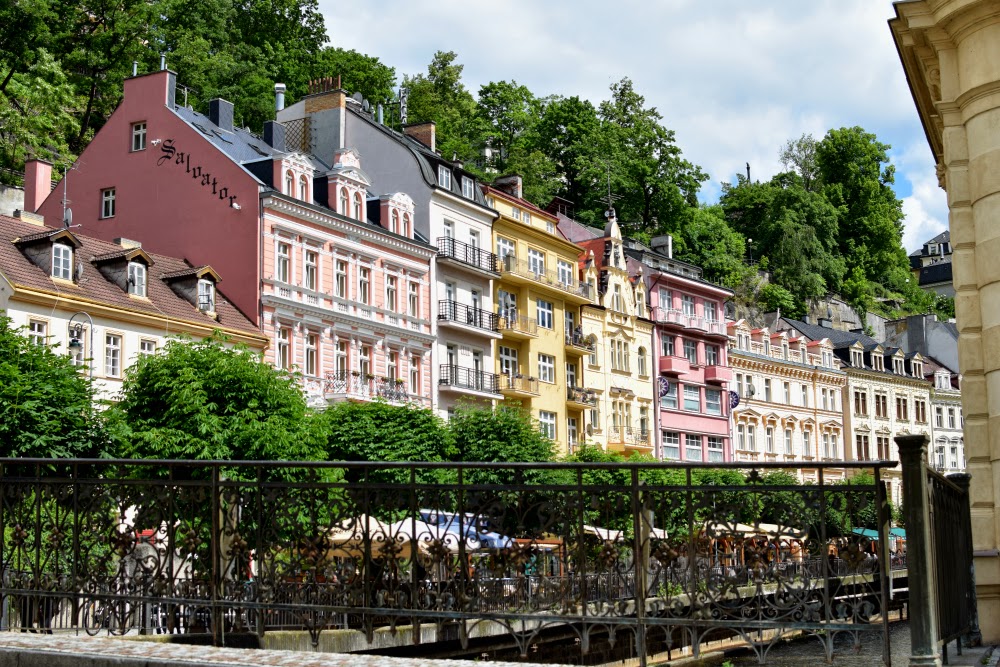 Are you wondering why a tranquil town in an oft-overlooked European nation gets so much international attention? I think these photos do the talking for me. No wonder Russian investors are embracing the city with stretched out, diamond-encrusted arms! It’s not Cannes, but it’s much closer to their homeland and on top of hosting film festivals and celebrities, the entire city doubles up as a spa! 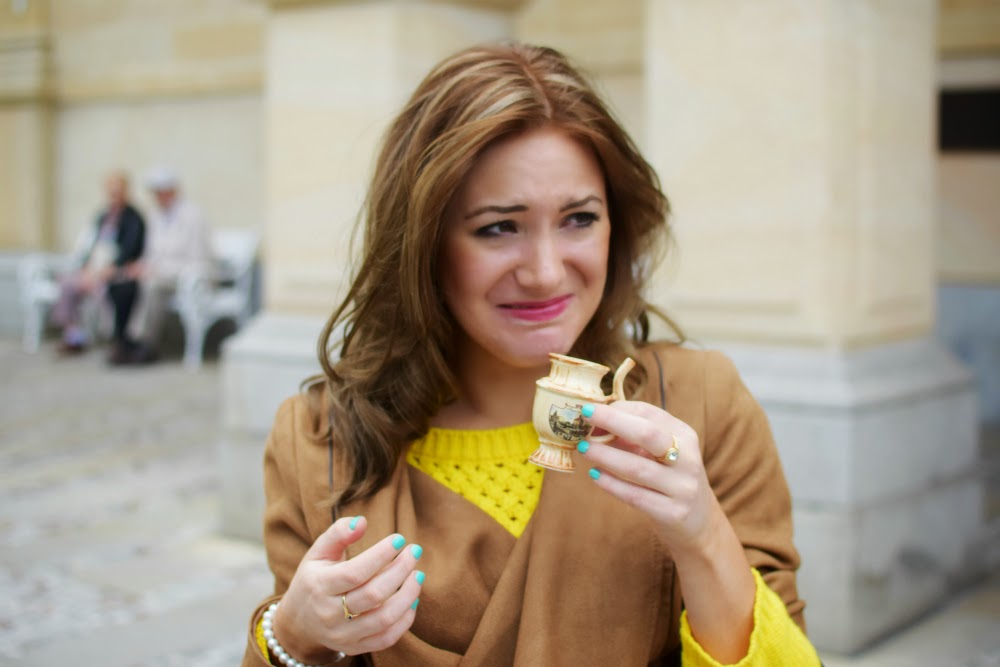 That’s right – I still haven’t told you about the hot springs! There are two things you must know about them: a) they’re incredibly healthy and b) they’re incredibly disgusting. I assure you that before drinking from one of the city’s springs I was a quaint smiling cherub – my grimace is directly proportionate to the taste of the water. Darned springs! They’re hot, they’re salty and they taste like liquefied death. But they will make you feel good in the long run and in no time, you’ll be running around like this… 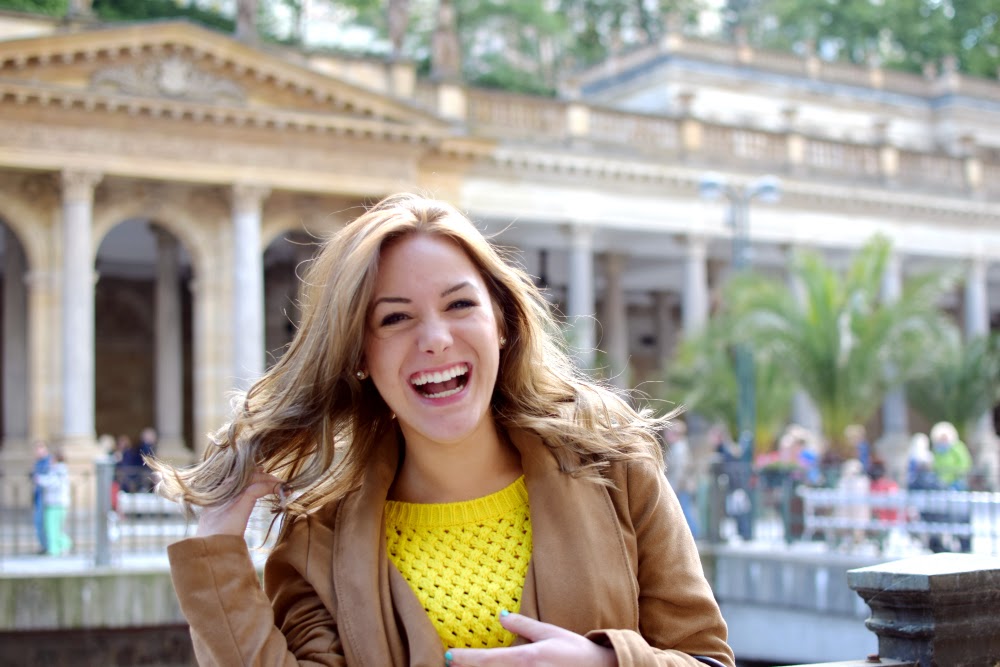 So give them a chance. Just don’t drink too much, because apparently their healthfulness is somewhat reversed if you do and you’ll spend the rest of your trip in the bathroom. Luckily, I was at no risk because all I could stomach was a tiny gulp. Another must-try item are the warm round Carlsbad wafers sold in little stalls along the promenade – they taste better than the water, but unfortunately their flour-and-sugar combo does not deliver the same health benefits. 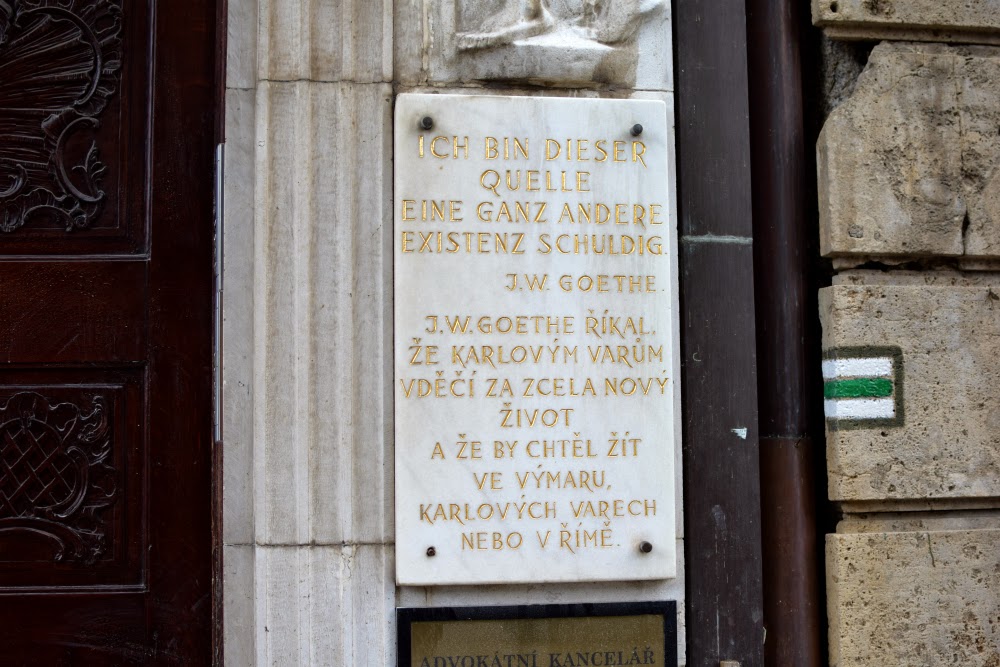 With all of its qualities, it’s no wonder that wealthy Russians have now bought up the majority of the city centre. You say that doesn’t convince you and you’re still not sure you should pay Karlovy Vary a visit? Maybe the 18th century writer J. W. Goethe – one of the many celebrities who have lived in the city – will help. As the plaque above reads, he said that the city has provided him with a new existence and that he would like to live in one of three cities in the world – Weimar, Rome or Karlovy Vary. How’s that for a recommendation?
Print page